Lake Qaroun nature reserve in Egypt’s Fayyoum, the oldest in the world, is distinguished by its matchless environmental and natural assets. Within this reserve that comprises 1155 sq. km of land and 230 sq. km of water, both the old and modern civilizations have converged.

Lake Qaroun is a safe haven and warm cradle for thousands of migrant birds fleeing the severe cold of Europe. It is also the incubator and the happy nest that embraces infant birds on the lake islets during reproduction time. Various kinds of fish live in the lake waters, while many species of mammals, reptiles and birds live in this wonderful reserve. Moreover, the reserve abounds in rare fossils, archaeological and geological formations.

Lake Qaroun was declared a nature reserve by the virtue of the Prime Minister decision No 348 of 1989 with a view to protecting and conserving the biological, archaeological and geological diversity of the area. Being a damp land area, special attention was required to maintain it.

The reserve contains several monuments including as-Sagha (goldsmiths) palace that lies at the northern part, dating back to the Pharaonic Middle Kingdom. It looks like a small temple made of rosy stone with seven compartments. Three km away from as-Sagha palace there lies Abu Lifa Monastery that was built in the monastic era on an elevated spot in the bosom of a mountain to keep monks secure from Roman oppression. Greek monuments include relics of the old town of Skitnopius, once the departure point for the south desert-bound trade caravans.

Fossils, many of which are kept at the Agriculture Museum in Cairo include those of a strange animal, found to have lived in Mount Qatrani. A carcass of the extinct mammal, which lived in this area some 35 million years ago, was exclusively discovered in Lake Qaroun. The second important fossil in the reserve is ape Egpotothyx, the oldest ape in the world dating back 32 million years ago. This animal is the connecting link between apes of old and modern ages. 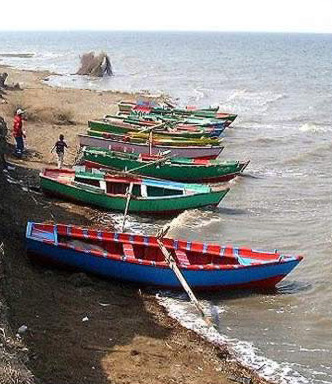 The Golden Horn is one of the most wonderful islets in the reserve. The 376-feddan-islet serves as the most convenient spots for bird reproduction, specifically the flamingo. Despite its scanty size (only one sq. km), the importance of Hamour islet rests in its favorable climate for reproduction of both resident and migrant birds, as the islet rises a little above the lake water level. 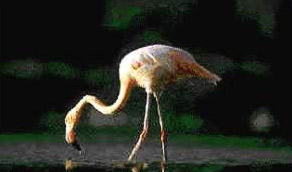 The biological diversity of the reserveis very important when one considers that 88 species of birds have been spotted here. In addition, there are rare kinds of ducks, eagles, falcons, hornbills, macaws, swans and parakeets. Many wild plants are also to be found. The lake houses more than 10 kinds of fish, including garfish, eel, cod, muskellunge, halibut, striped bass and shrimps. The reserve also offers shelter to five kinds of mammals including Egyptian hyena, red fox, beaver, kudu and gnu. Moreover, the reserve houses rare kinds of reptiles including the Egyptian Cobra, red-spotted and coral snake. All these make Lake Qaroun one of the richest nature reserves nearby Cairo.